Well, life can throw some pretty interesting curve balls, I have learned. The truck has been in storage and it will probably take a while before I get to seriously work on it, but I have started again to search for information. And I made a decision; I will restore it originally, as far as possibly within reason. The IRS unit is sold.

First on my list is finding details on the wood of the cab, as all the wood on mine is gone. I plan to make a cheap spruce frame (from the DIY store) first, and once it is done copy it in white ash.

See you again in hopefully less then three years time,


Today was a big, big day for the project. Not much was really done, actually, but what was done opens up the road to a successful project. While dismantling the truck, I contacted the Dutch DMV about the vehicle’s ID. They advised me to come in with the truck, to have it’s ID established before taking it apart further. So today, I did. Although I have the title and the tag plate on the truck, I was pretty nervous about the whole thing. What if they did not accept this as proper ID? Had I bought a piece of old iron never to be on the roads here? Yesterday I rented a trailer, and in the evening loaded up the truck and put it in the workshop at my work, so I could leave early this morning. 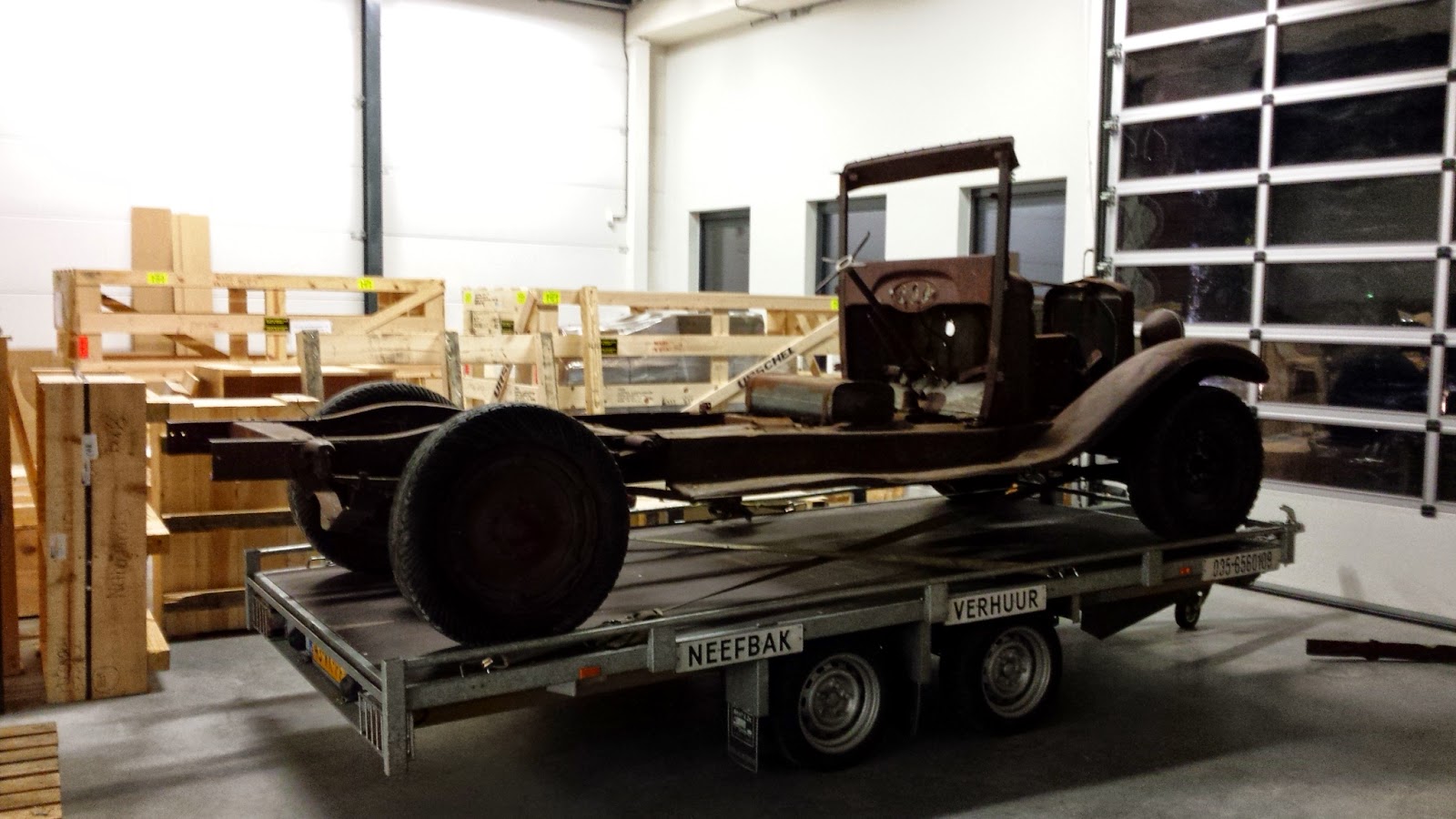 This morning I set out at seven o’clock, and I was well on time at the RDW (Dutch DMV) in Nieuwegein. There I waited in line to ‘check in’ for my appointment. 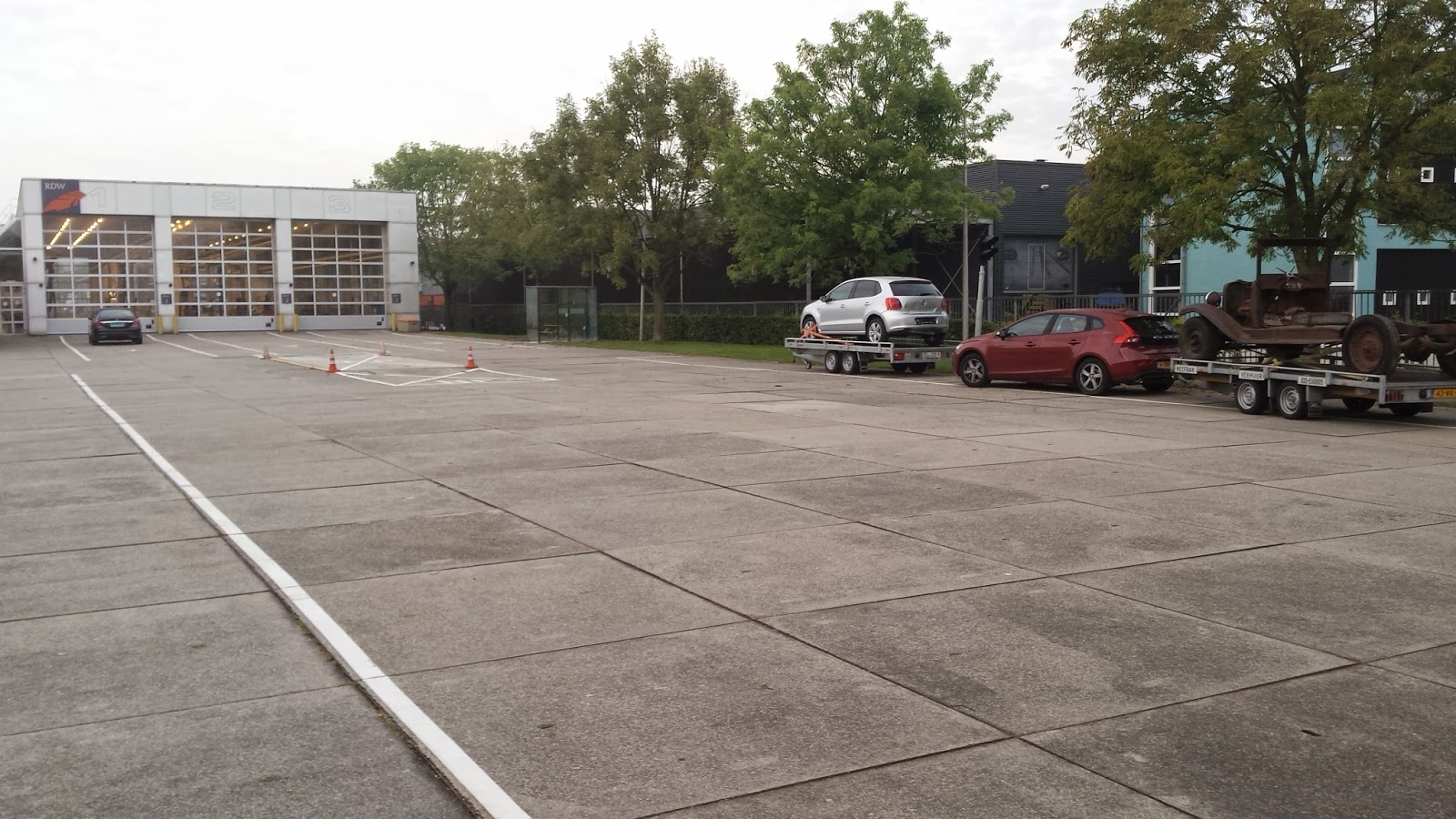 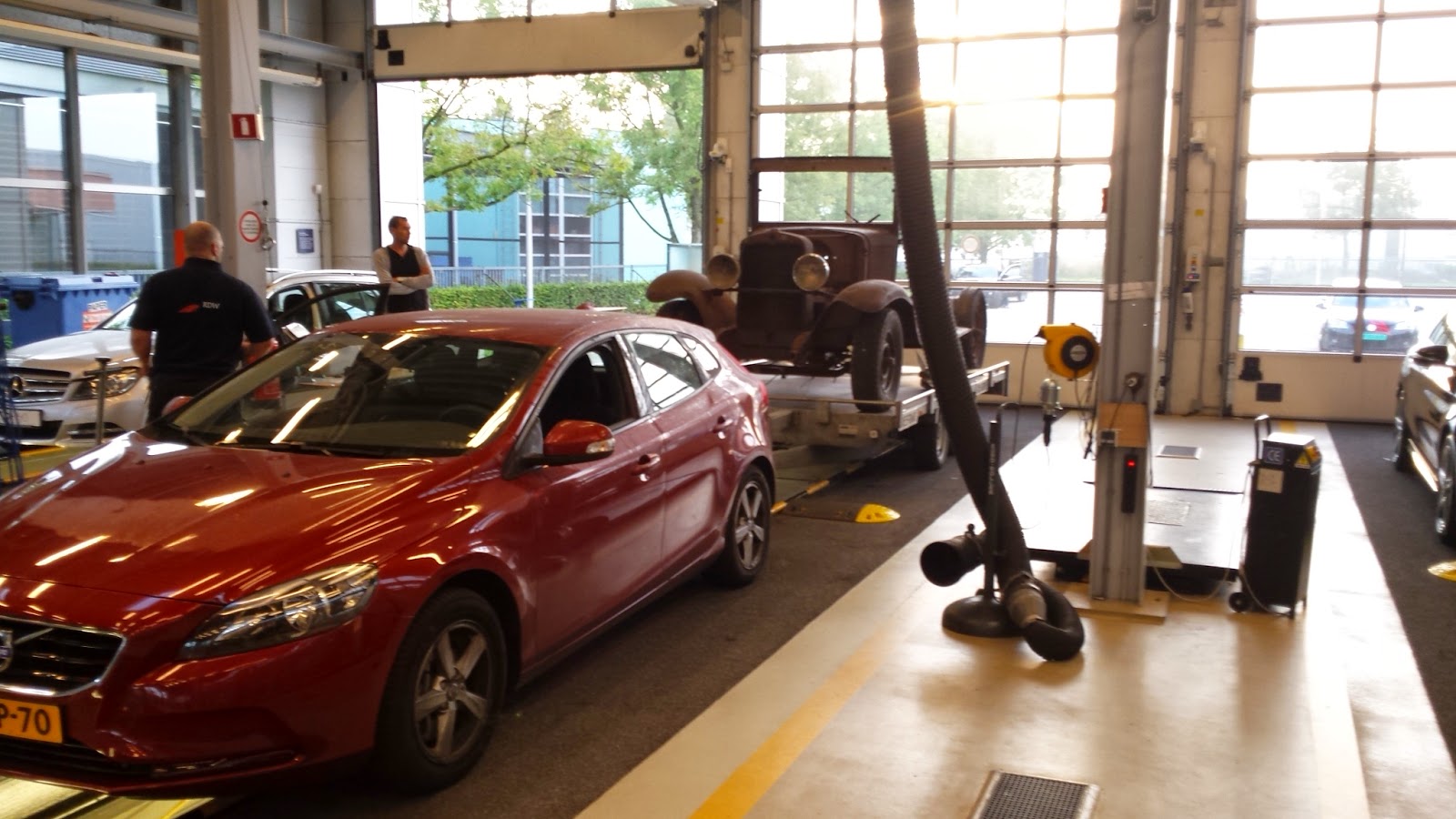 I booked an inspection with VIN number inscription, but this could not be done. It turns out you only get the VIN inscribed to the chassis when you present a complete and road worthy vehicle. Also, the DMV inspector ruled the presented VIN certificate and tag plate probably did not belong to this truck. I was scared at that point, as you can imagine. Did I buy a lot of old iron? Then the inspector came with the good news! He was able to make the motor number readable again, and the car could be identified by this number. 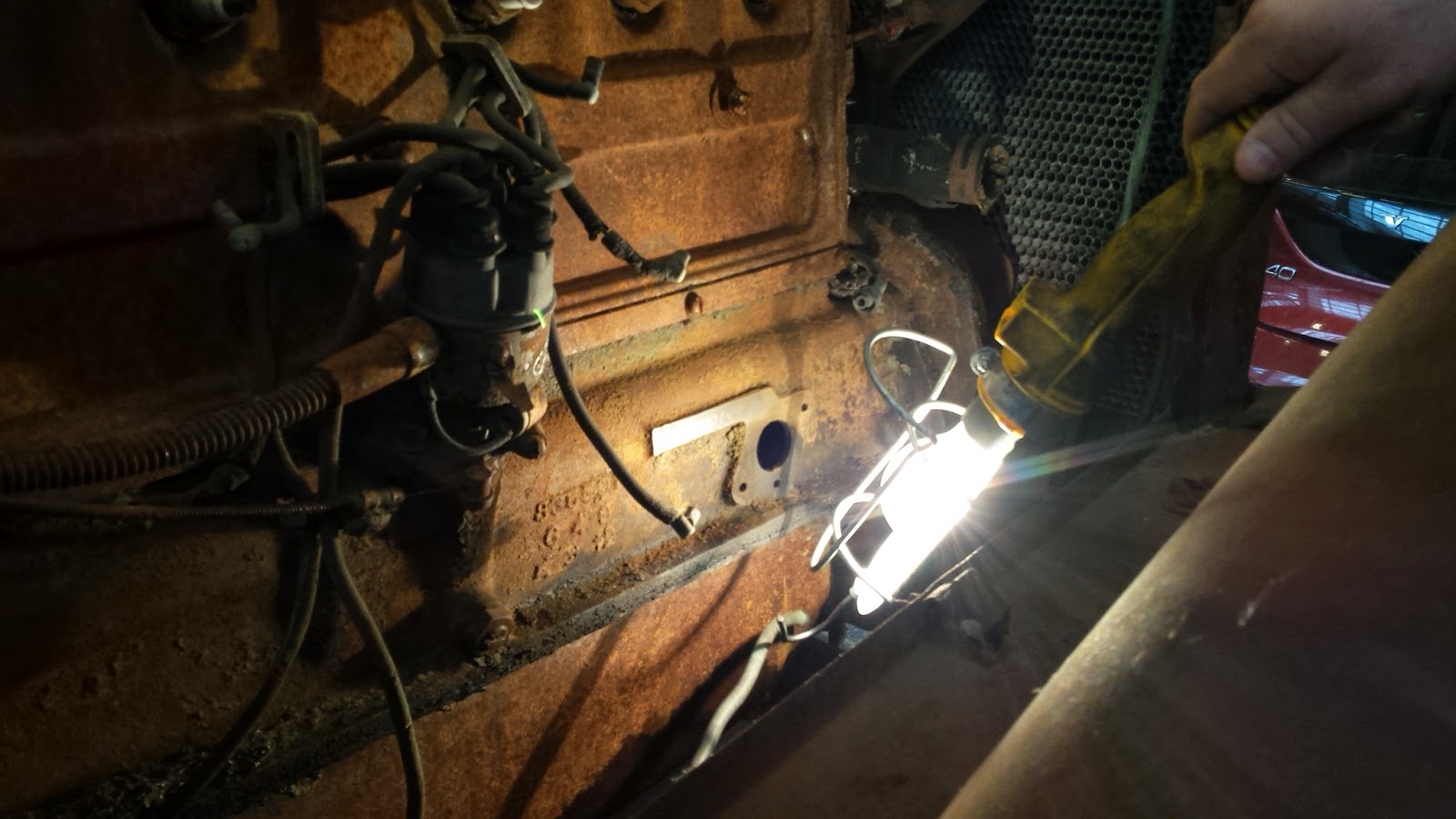 The car got ‘tagged’ and all tags were photographed (not only by me…) and registered in the DMV database.

One on the engine, small hole drilled in the casting: 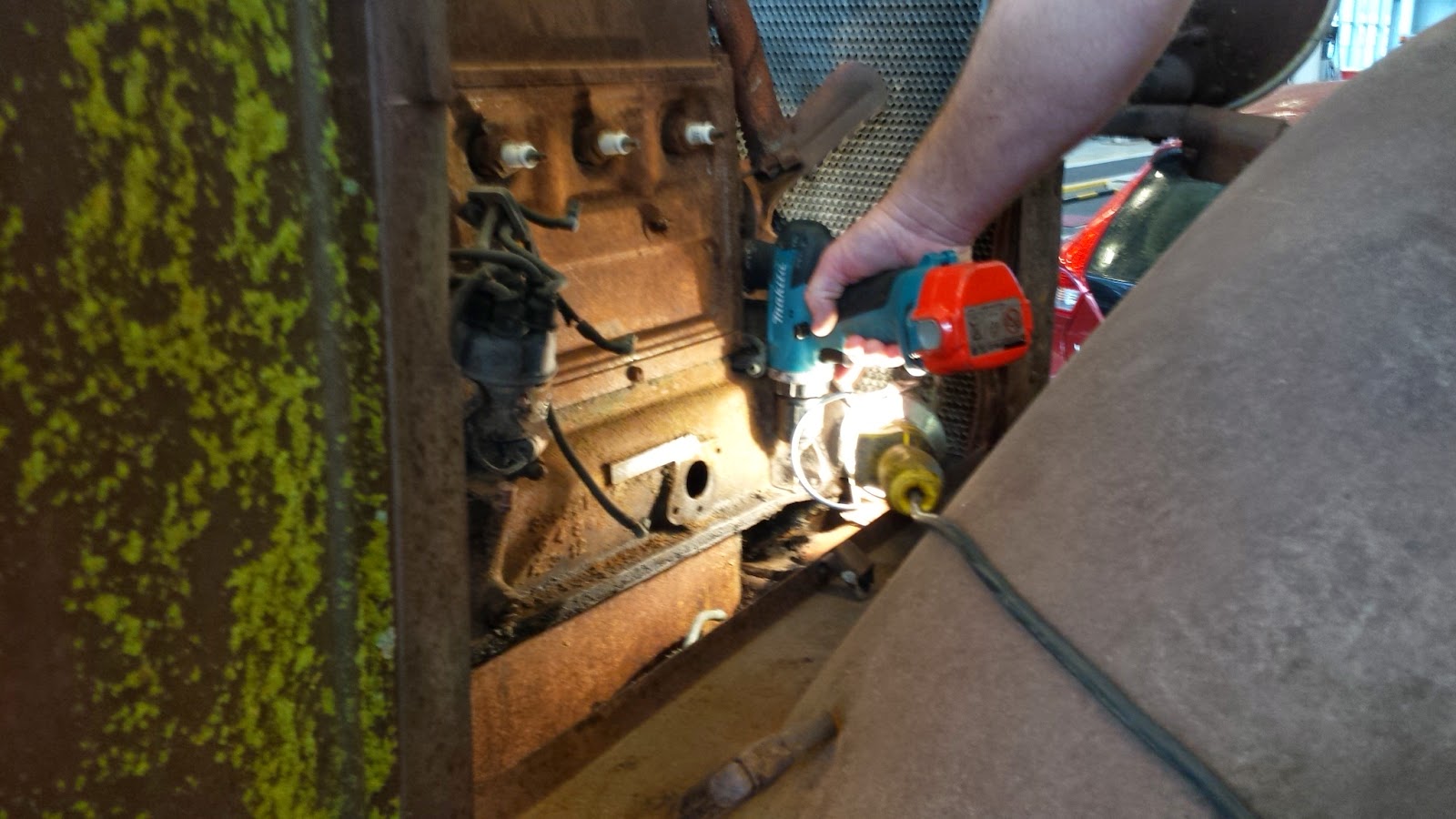 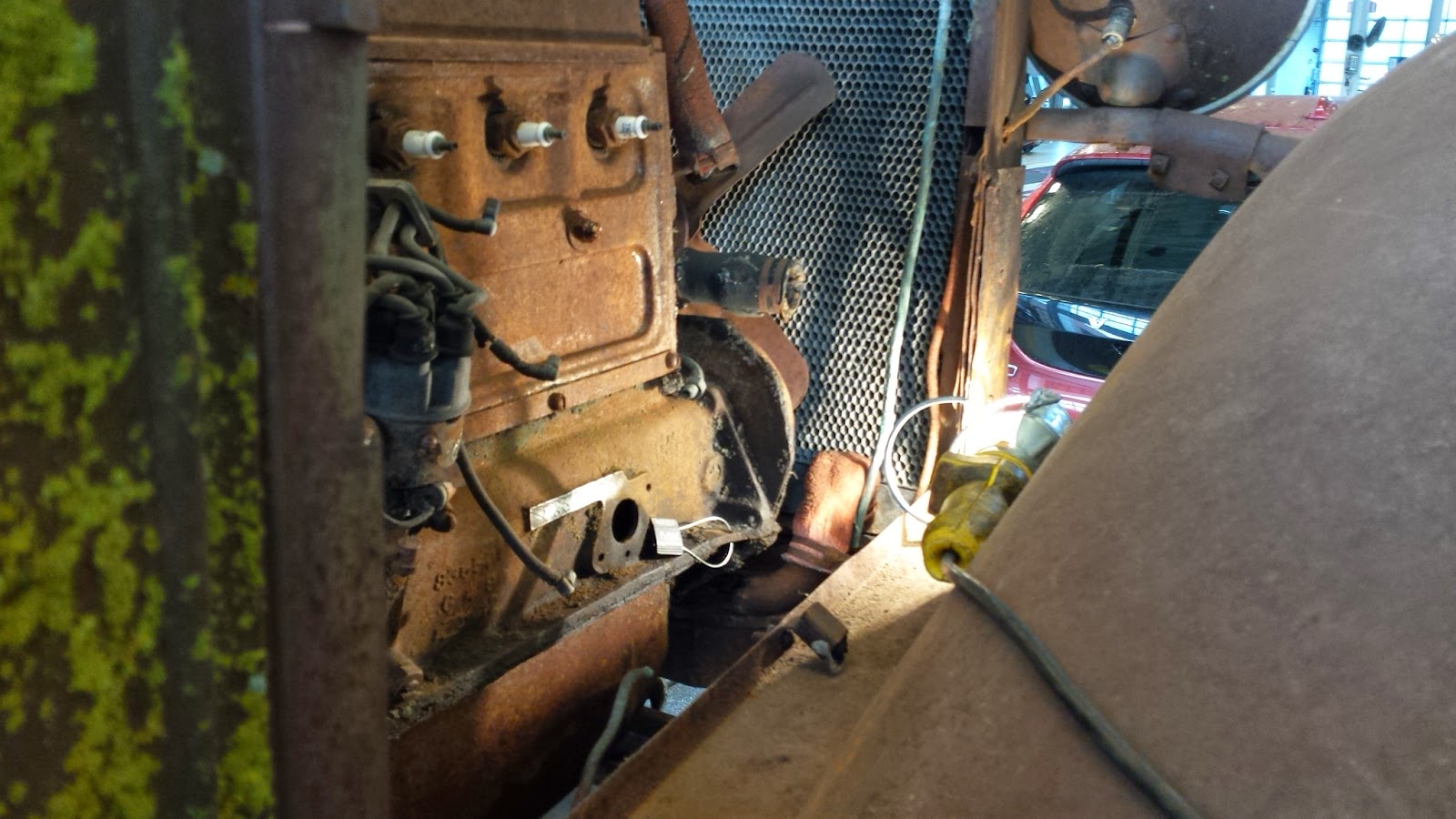 One through the bulkhead: 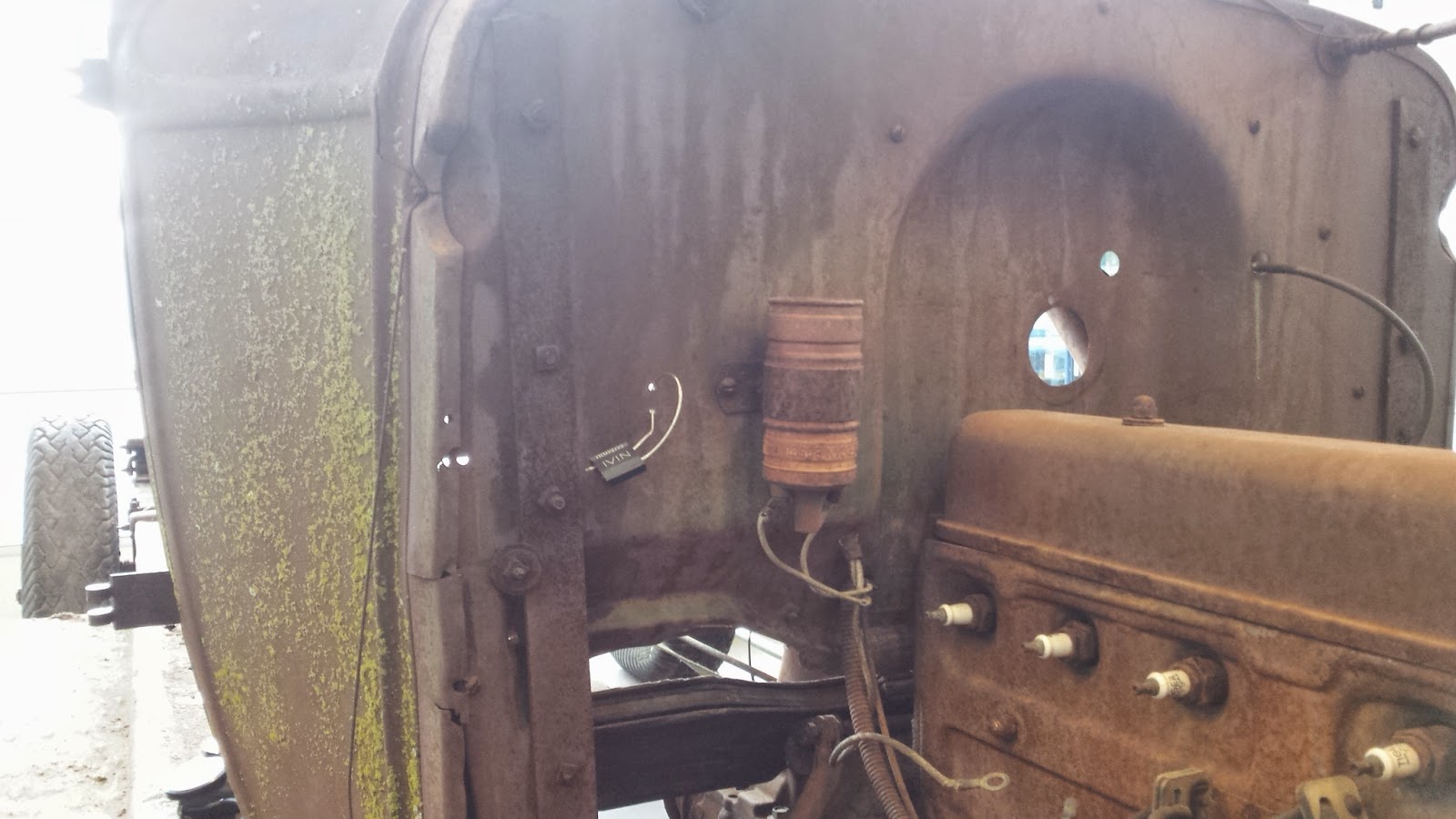 One through the chassis: 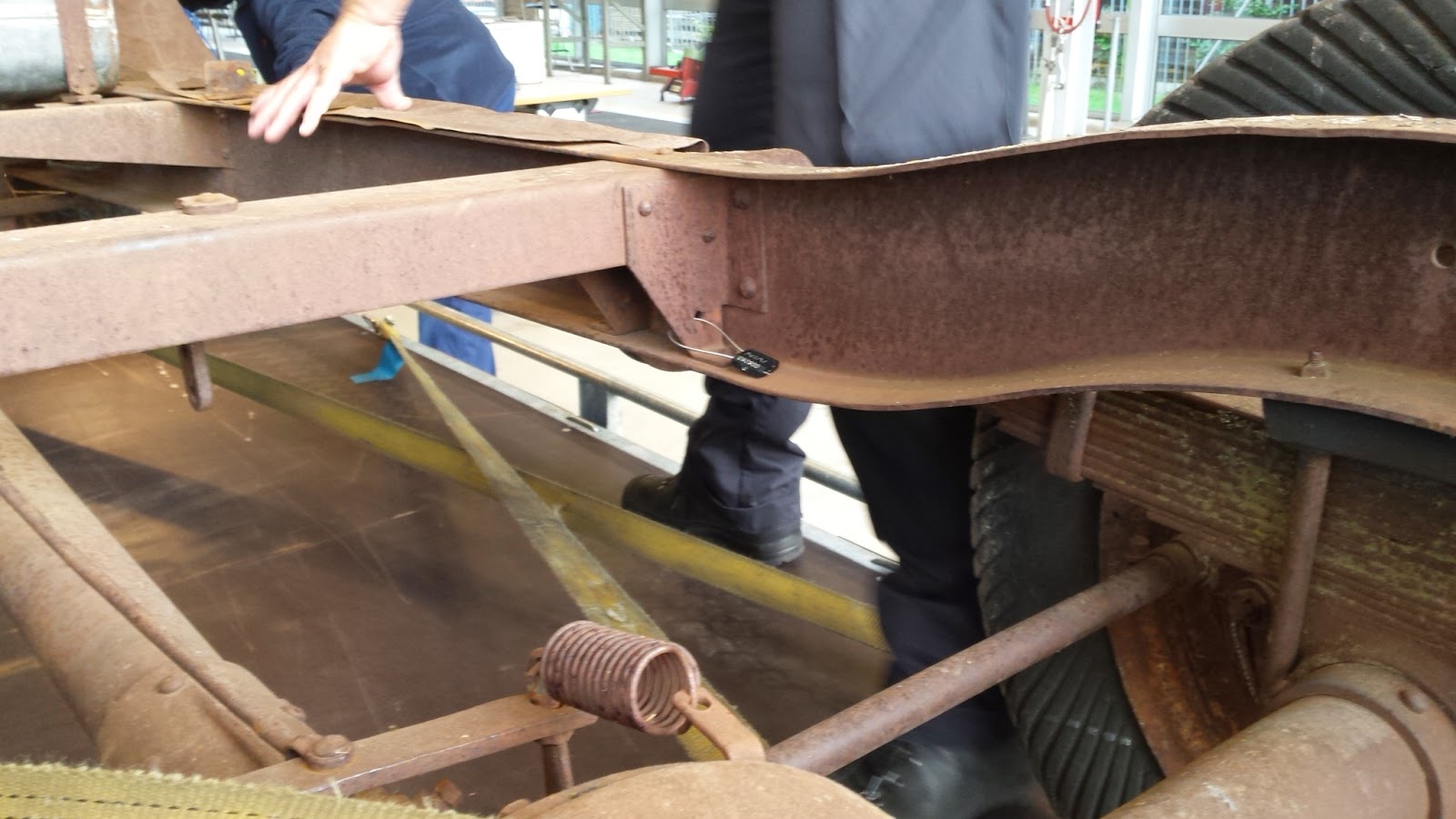 Now I can take everything apart further, and restore, rebuild, re-what-ever-I-like. I should take care not to remove the tags, of course, but they are sturdy and made to be on vehicles in need of restoration. Once the truck is roadworthy again, I can go to the RDW for an inspection. If the truck is as it should be, and all tags are retrieved undamaged, I can get a full registration on the car, Dutch VIN, licence plates, the lot. The inspector told me today was the biggest hurdle in the whole registration process, with this done it should be plain sailing (and a lot of work) from now on. Yeeeeeeeeeeeee!!!!!!!! I am happy!!!!!!!
Gepost door Unknown op 07:26 Geen opmerkingen:


Now about why I might do an original restoration on this truck. I started this project by saying I bought a truck now, because they are slowly becoming rare. Little did I know how rare. In the time since I wrote my first post in this blog, I became a member of various forums, amongst which VCCA chat. Of course, on such a vintage forum people dislike the idea of hot-rodding the truck. But amongst all remarks about keeping it original, some folks actually took the time to motivate their opinion and educate me on the subject. The common denominators about the rarity of the truck are:


- Most trucks did not receive a lot of TLC (you can also tell on mine…). They were used hard, fixed on a budget if broken. And if no longer economically viable, abandoned or scrapped. Not like passenger cars loved and cared for by families, these trucks were tools.


- In the second world war, the US government was looking for all scrap metal they could get their hands on to support the war effort. So anything metal you no longer use, you would donate to the state for them to melt and re-use. Many old trucks, abandoned and in dire straits, were simply donated and melted to become P51 mustangs (not really, as those are mostly aluminium, but it is a nice thought. They probably became ammunition or armour plating…)


So, in short, finding these trucks is not easy. Using the simply tool Google I can find plenty pictures of old trucks, but nowhere near the number of pics you can find of cars from that era. And on specific 1929 Chevy trucks, relatively little is found.


I have not made up my mind completely, but the idea of the original restoration is slowly growing in my head. Also I keep finding more resources for parts and information, which is a motivation for the original choice. Anyway, I’ll let you know when I finally make up my mind…


Progress! Well, design-wise. I’ve taken all the tied up pieces off the truck, and started to take it apart further. The first major project will be the rear drive set-up. The rear now looks like this: 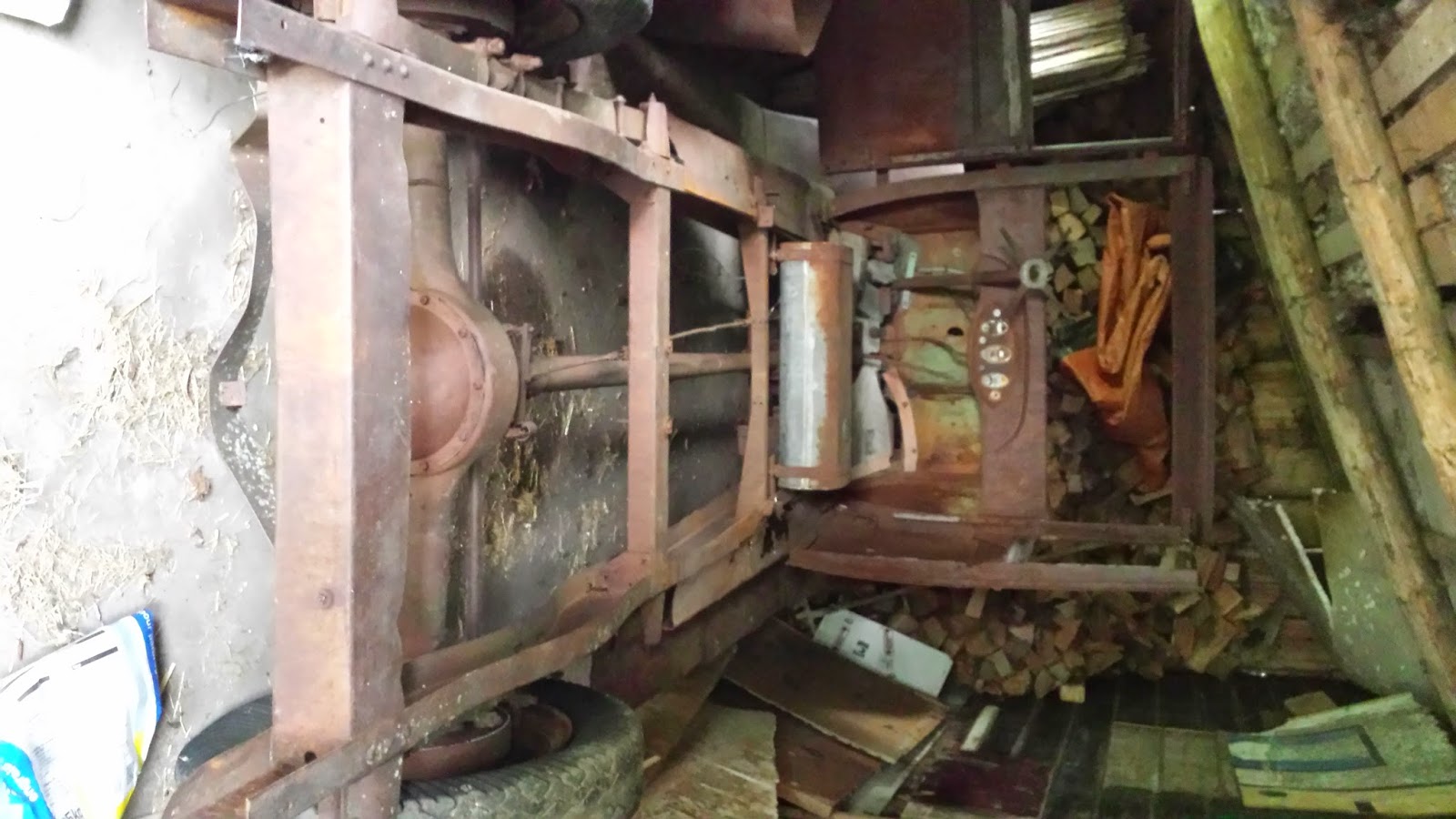 Back to front: the rear bumper bar is missing, then there is the first cross member, then we see the axle, then the second cross member. The first and second cross members are mounted at the location at which the current leaf spring suspension is mounted to the frame. Yesterday I measured a lot and made a sort-of template of the frame to copy to CAD. I first cut a piece of cardboard to fit around the suspension mounts: 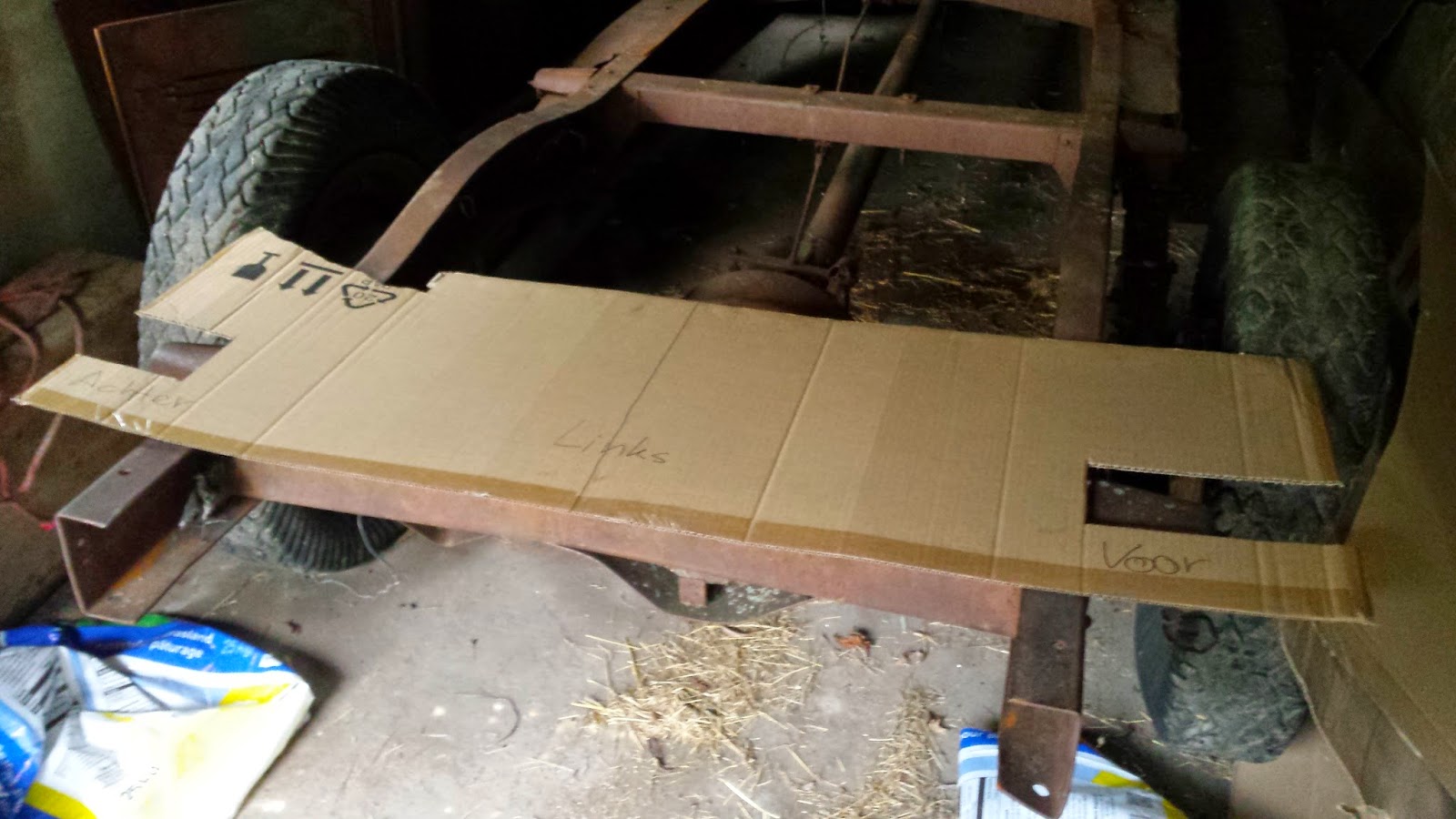 This cardboard I mounted to the frame: 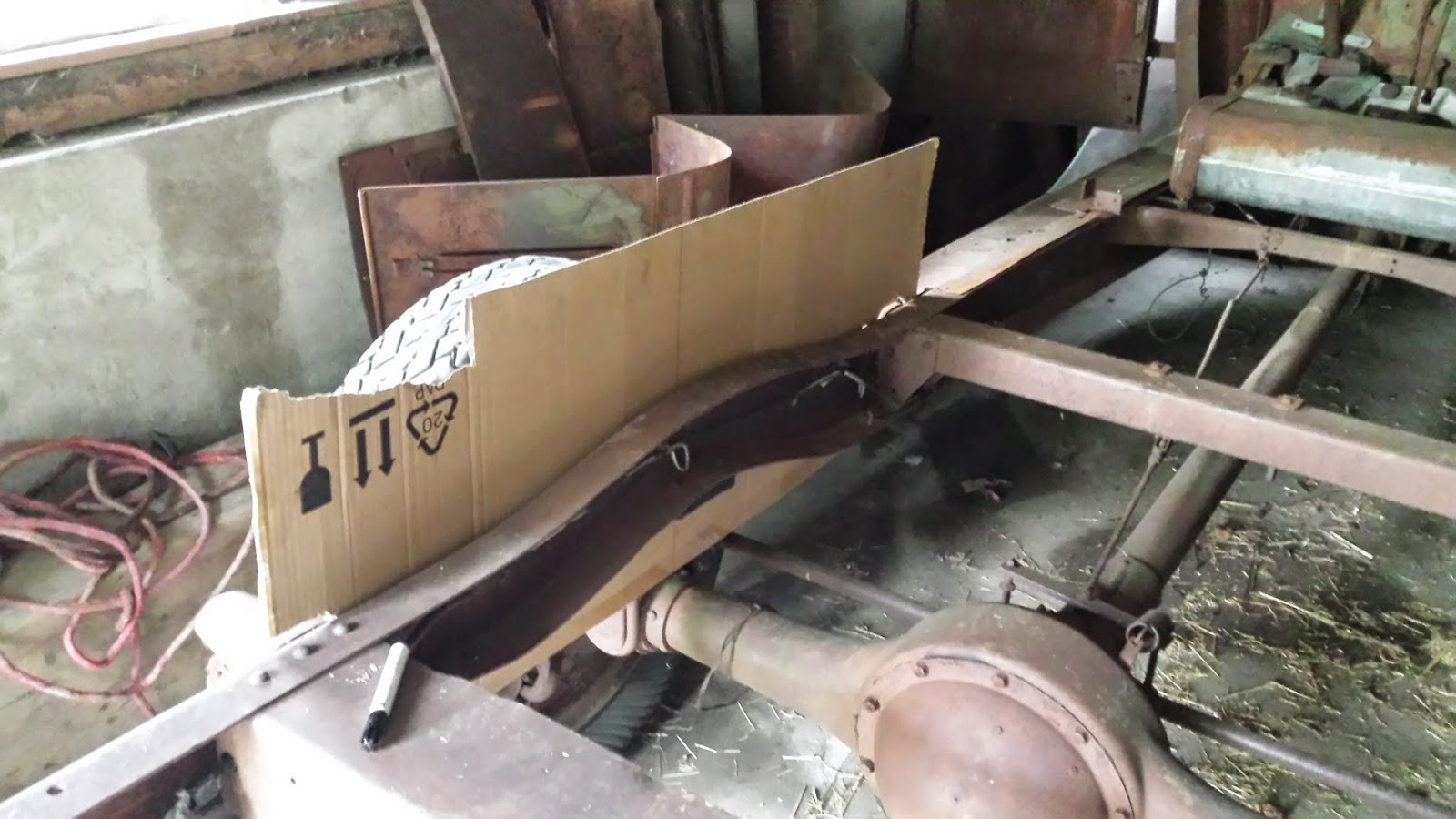 And with a black marker I traced the frame: 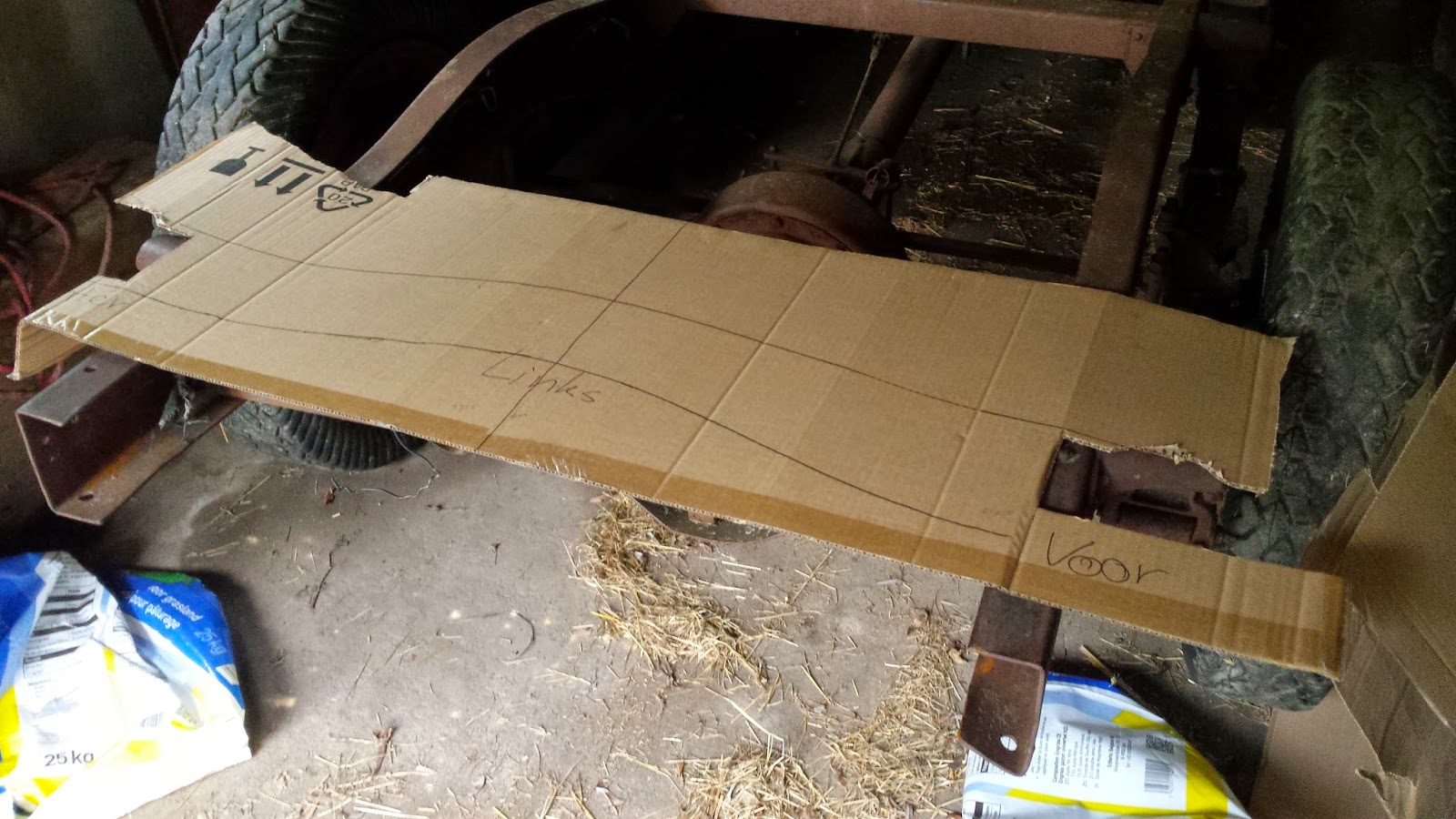 I did both the left and right hand sides, because it seems the truck is not perfectly symmetrical. You can see the left hand side tilts inward, I measured 8 degrees: 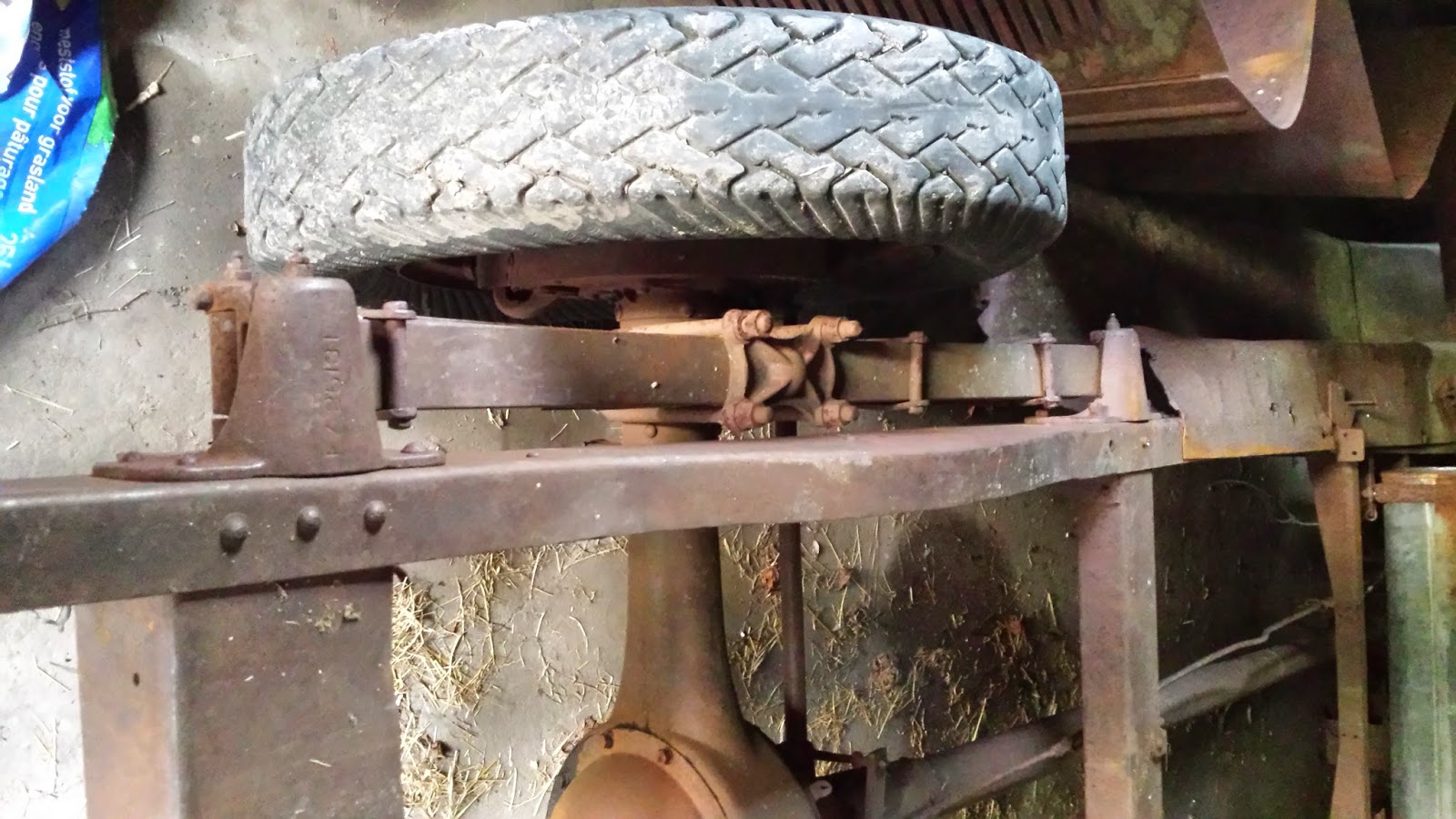 The right hand side only tilts in 3 degrees: 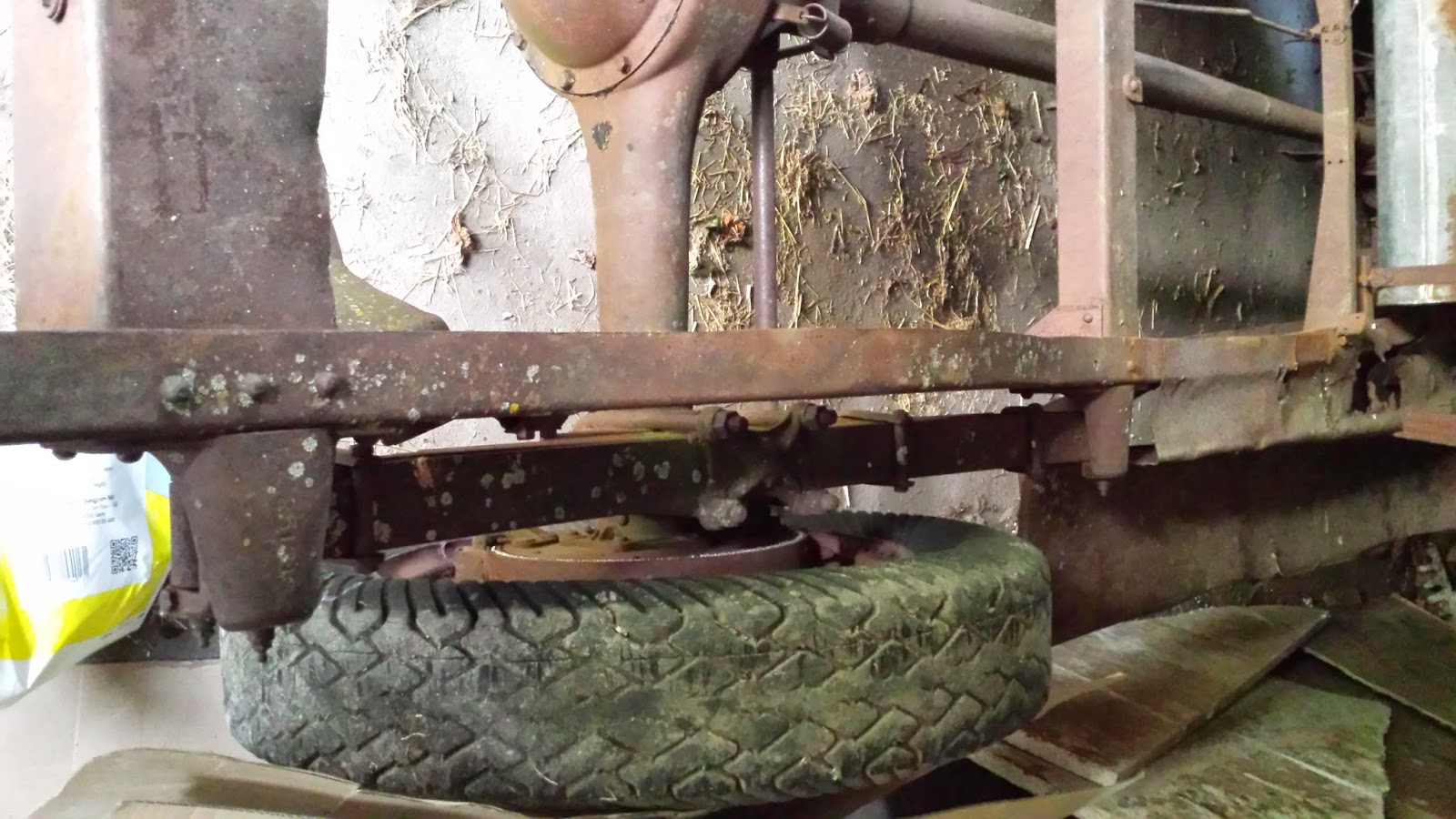 This means the new sub frame will also need to be a-symmetrical to fit right, and to have the IRS unit mounted central to the main frame.

At home, I transferred all dimensions and the traces to CAD: 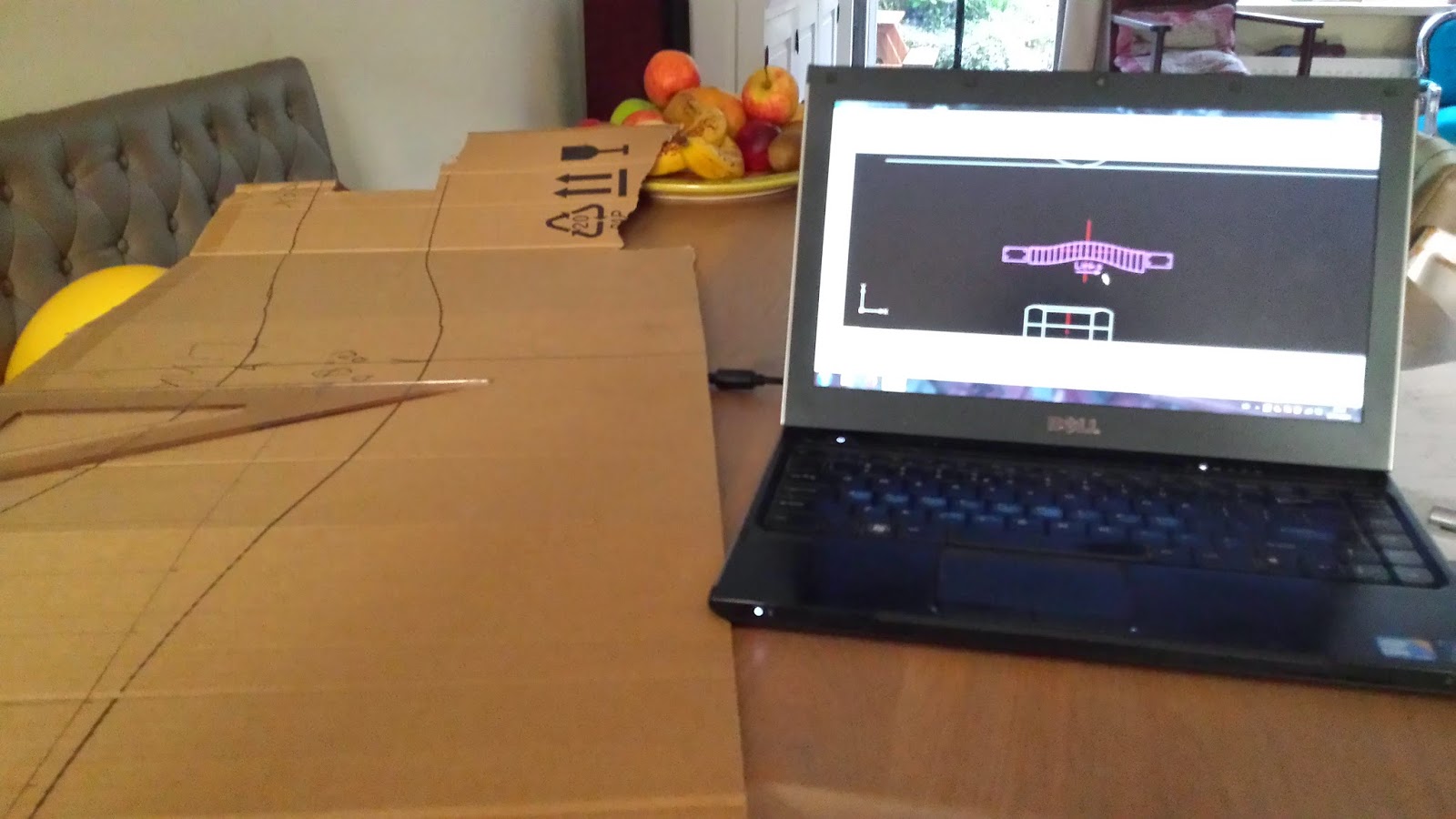 So, here’s the first sketch of what I am going to build as a rear axle sub frame: 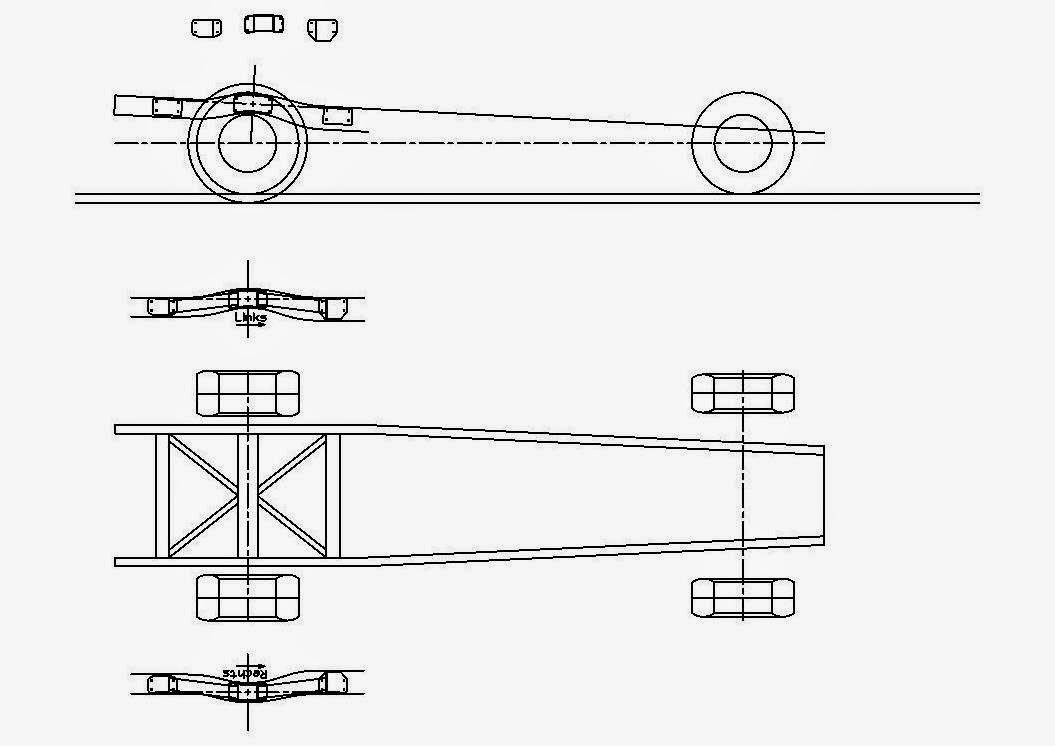 My son and I collected the car from the transporter's today, and we would a cheap and good storage close to our home. I'm even allowed to tinker on it in the storage!

Anyway, the proof is in the pictures...

Daniël attempting to drive the truck onto the trailer. Didn't work, although he did make all the right noises: 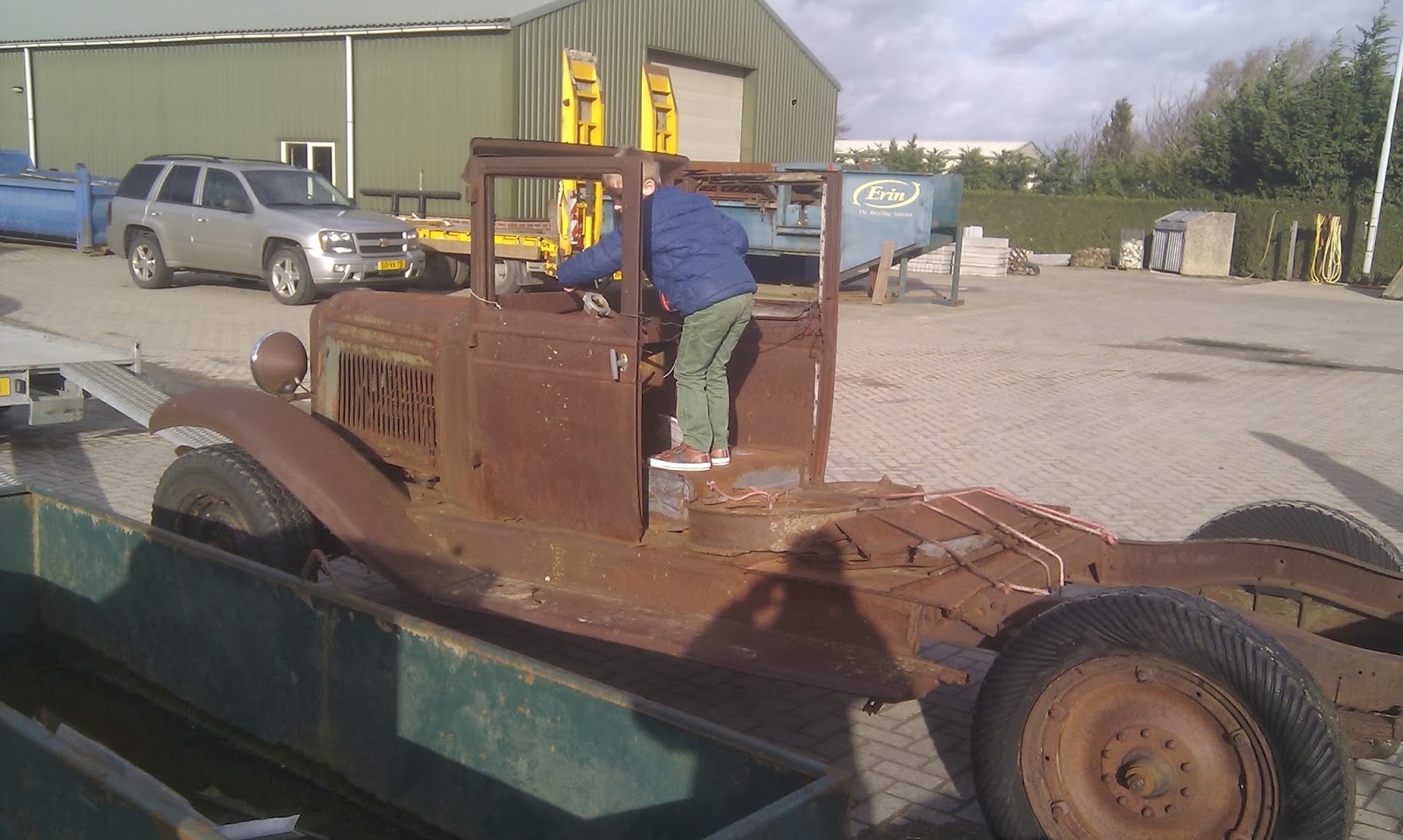 On the trailer behind our car: 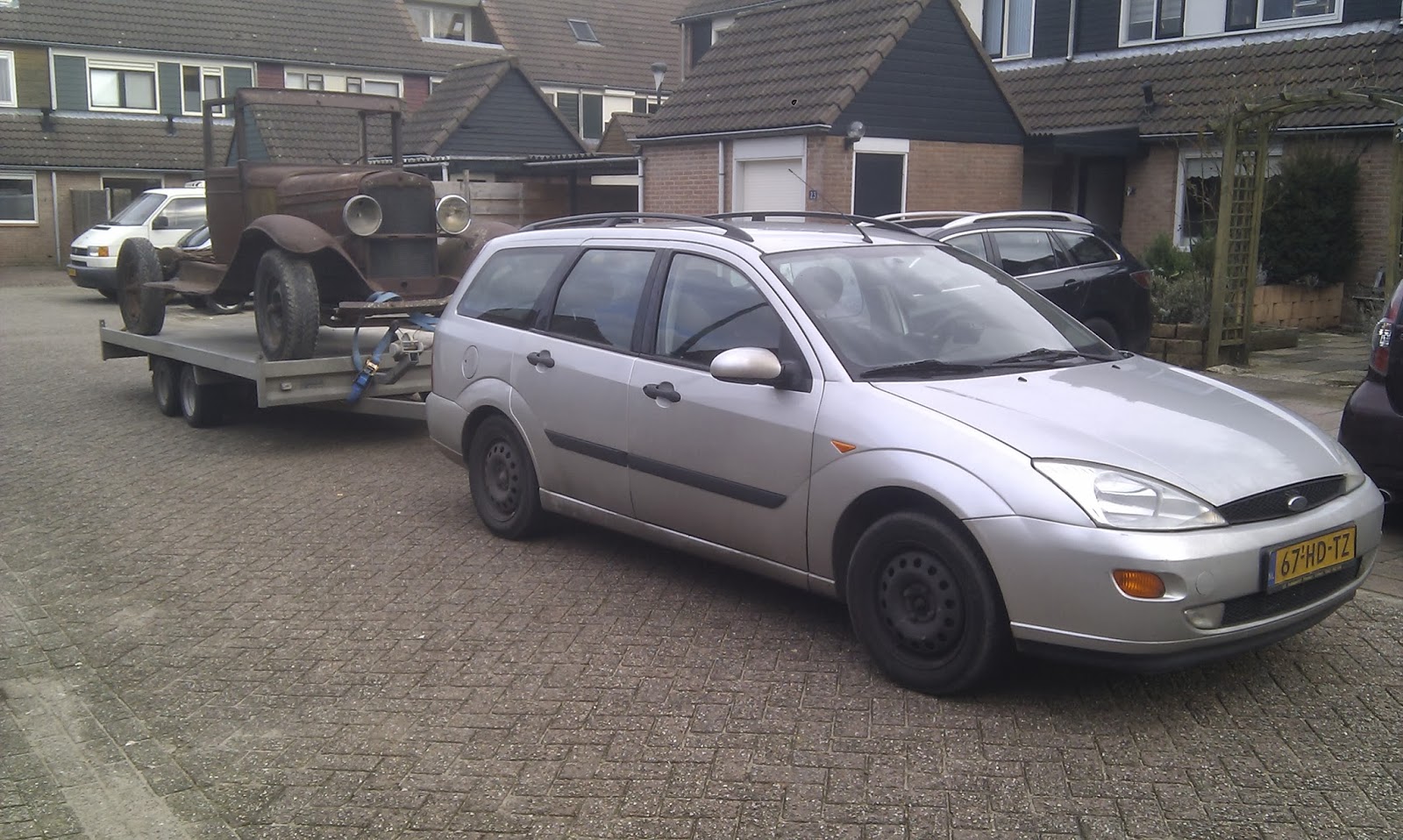 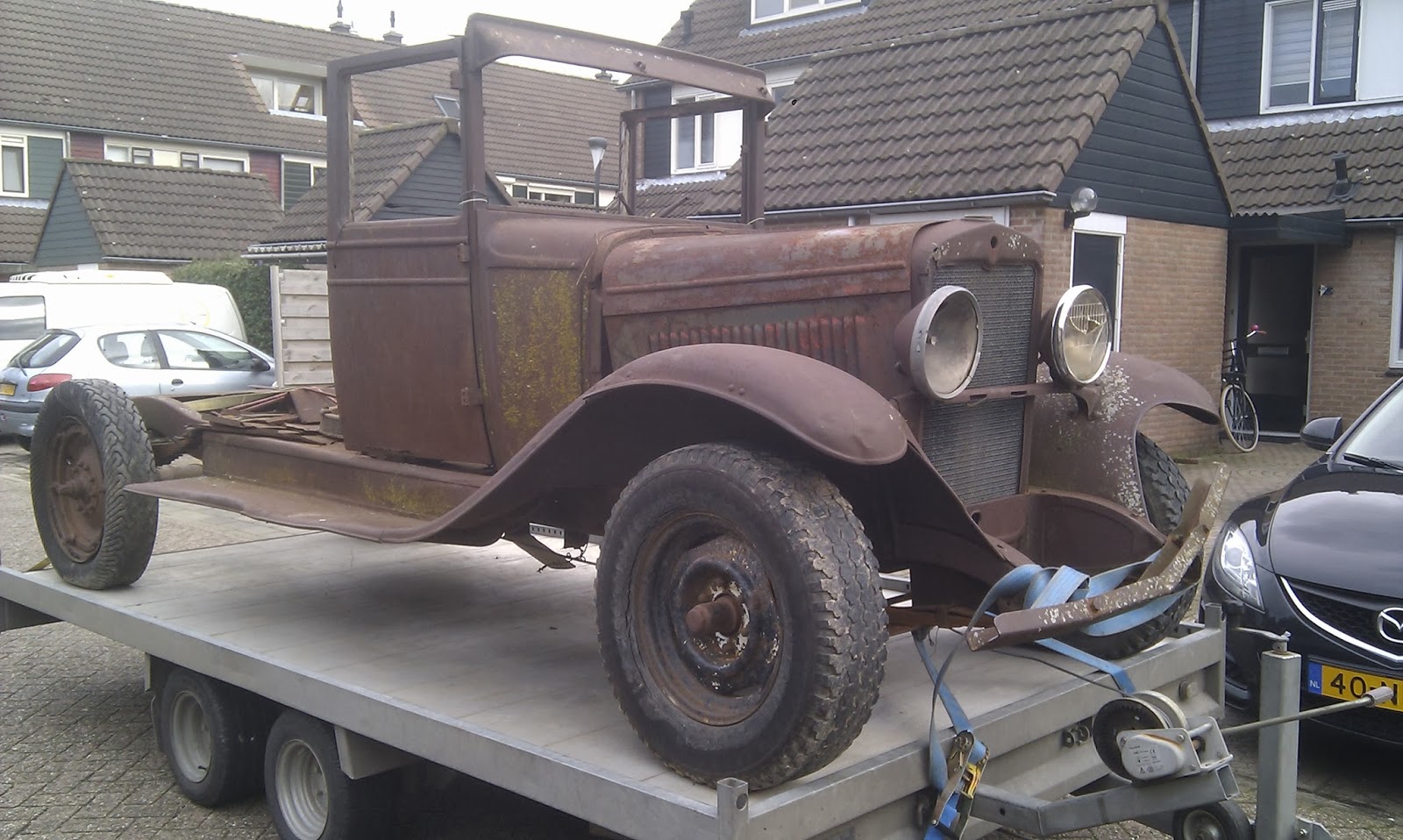 And in the storage. Yes, it's tight, and not meant to be a workshop, but it is a lot better than nothing. 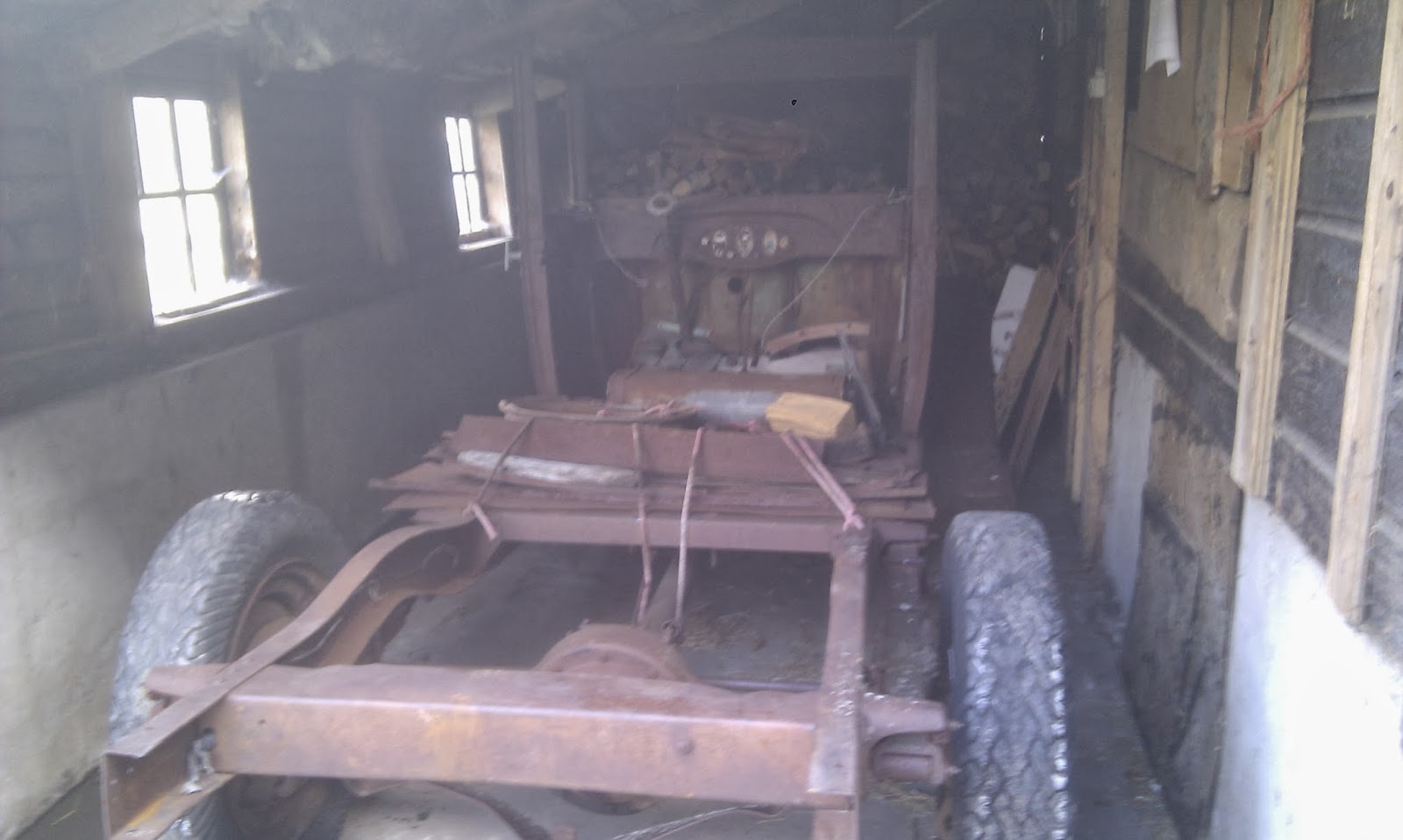 Well, first purchase made. I found a large Jaguar breaker which sells the front and rear suspension units I want to use. So, yesterday my son Daniël and I went to Gorinchem and bought a Jag IRS (independent rear suspension) unit. These came under many Jaguars like the XJ series, E-types, 420 and 420G, etc. It is a full unit with dif, suspension, brakes, etc.

Here it is tied down in the trailer: 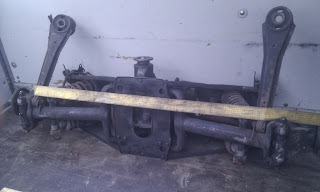 And here is Daan on the fork lift truck taking the unit from the trailer: 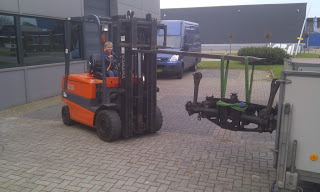 Yes, that's a four year old in the fork lift. You may guess where the keys to the truck were when I shot the picture. The unit is now in the workshop at my work, we have a hot jet water cleaner there which I will use in the next lunch break to see what I actually bought.
Gepost door Unknown op 00:37 Geen opmerkingen:

Oh, BTW, there is a little doubt about the year of build, hence the blog title. I think it is a 1929 model because of the dash and some body curves, but the papers say 1930. With the truck being registered only in the 1950's, we think they made a fair guess back then. What it really was, we will probably never know. I don't mind...